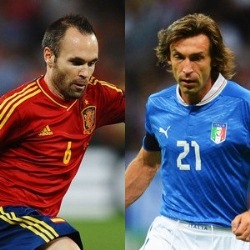 The Euro 2012 tournament is nearing its end and there’s only two teams left standing. Spain and Italy.

The two European giants go head to head tonight at Kiev’s Olimpiyskiy Stadium and it’s anyone’s guess as to who will come up tops and crowned King of Europe.

Both teams go into the final in great form but it is Spain who is considered the favorites to win the title. However the Italians will not let Spain have it easy and you can be rest assured that both teams will be out to create history.

Who do you think will win the Euro 2012? Will it be Spain or Italy? Cast your vote now and let us know what you think. Cheers!