Articles Stars Of The Future Videos

TFM’s Stars Of The Future is back and we now take a look at Brazilian starlet Douglas Costa who plays for Ukrainian club FC Shakhtar Donetsk. 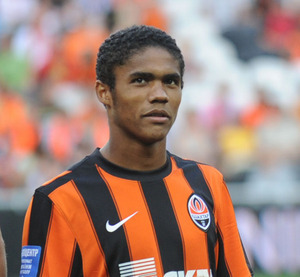 Douglas Costa was born on the 14th of September 1990 in Sapucaia do Sul, Rio Grande do Sul and plays for the Brazilian U20 team.

He is 5 ft 7in and normally plays as an attacking midfielder or a left sided winger. It is also know that he can operate on both flanks.

Douglas Costa is considered one of the top young talents of the world and has been dubbed as “The New Ronaldinho”.

He has received rave reviews for his quick feet, and ability to beat the toughest of defenders with his vast array of tricks.

Douglas Costa is naturally a left-footed attacking midfielder who can also play as a winger. He is also known for his ability and vision to deliver killer passes. He is also a free-kick specialist.

Costa began his youth career at the tender age of 10 with Esporte Clube Novo Hamburgo, or Novo Hamburgo, a local club in his place of birth which competes in the Campeonato Brasileiro third division.

The talented youngster played for the club for only a year before moving to Gremio the following year. 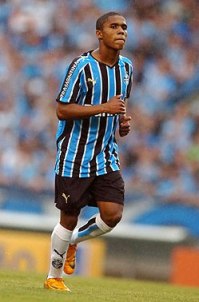 Costa joined Gremio in 2002 at the age of 11 . Gremio is a Brazilian professional association football team based in Porto Alegre, Rio Grande do Sul and the move was a step up for the youngster.

Gremio was also the same club where Brazilian legend Ronaldinho started his career.

After moving through the ranks, Costa was offered a professional contract with Gremio, with an estimated £20 million release clause.

The skilled attacking midfielder didn’t take long to make his mark as he scored on his first team debut for Grêmio, netting the equaliser in a 2–1 win against Botafogo.

Ever since making his professional debut for Gremio, Costa has made waves across Europe and European giants such as Chelsea FC, Manchester United, Real Madrid and FC Barcelona have been linked with the youngster.

However on 10th of January 2010, as a surprise to many, Douglas Costa signed a 5 year contract with Ukrainian giants Shakhtar Donetsk. 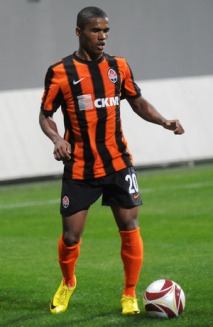 The transfer fee is believed to be around the region of €6 million.

Adjusting life at a new club and country, Costa made his competitive debut in a Europa League tie in a 2–1 defeat at Fulham’s Craven Cottage.

He then made his home debut the following week in the 2nd leg of the tie.

Costa’s debut season with the Ukrainian side started of with a slow start but the young attacking midfielder is beginning to find his feet and has helped Shakhtar turn their season around.

He has so far made a total of 23 appearances for the club and scored 8 goals so far. Not a bad record at all for a young player in a completely new environment.

Costa is currently used on both flanks by Shakhtar even though he is naturally a left sided player. He is exploited for his ability to cut inside from the right which proved to be a real goal threat.

Douglas Costa is yet to make his appearance for the senior Brazilian team. He was however a member of the Brazilian U20 squad. 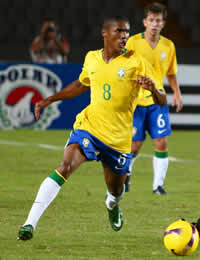 He has made a total of 15 appearance for the Brazilian U20 side and scored a total of 4 goals along the way.

Costa competed with other Brazilian starlets such as Neymar and Ganso who have since made their debut for the Brazilian national side.

With his improving form for his current club, it won’t be long before the talented young midfielder is drafted into the national team.

He is definitely an asset as there are very limited left sided players and the Brazilian national side will definitely need his services in the future.

So what does the future hold for Douglas Costa. We at TFM believe that it won’t be long before he is snapped up by an European super Giant such as Real Madrid, Barcelona, Inter Milan or Manchester United.