Featured Stars Of The Future

After a long break, TFM’s Stars of The Future is back and we will now take a look at a promising young midfielder from Italy, Marco Verratti. 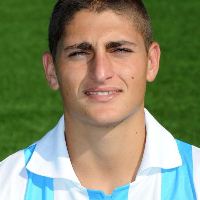 Marco Verratti is an Italian midfield play-maker. Verratti was born on the 5th of November 1992 in Pescara. He is 1.65 m or 5 ft 5 in in height and is definitely one of the shortest professional footballer in the modern game.

Veratti was recently signed by French giants PSG for a fee of €12 million and this transfer is set to be announced by Pescara any time soon.

Marco Verratti began playing football for the Pescara youth team before joining them on a professional capacity in 2008 at the age of 16.

Verratti joined the Pescara senior squad while they were still playing in Serie B. He made is debut for the Italian side in 2008/09 season and began to appear more regularly in the 2009/10 season. This eventually proved to be the turning point of the young midfielder’s career and he has never looked back ever since. 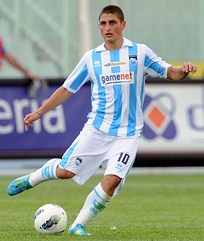 Verratti’s popularity began gaining momentum and rival clubs were taking notice of this emerging talent. The 2011/12 season was the break out season for Verratti where he was converted into a defensive playmaker and the youngster flourished in this position ever since.

The success in his new position drew comparison to the likes of Andrea Pirlo, the Italian legend who is also Verratti’s favourite player.

The same season, Verratti helped Pescara gain promotion to the Serie A.

Marco Verratti was signed by French giants PSG for the 2012/13 season. He will join the likes of Zlatan Ibrahimovic and Thiago Silva who was also recently signed by the French club.

Marco Verratti became a member of the Italian U21 squad in 2012.

Verratti made his debut with the Italy U-21 on 28 February 2012, starting in a friendly match against France. 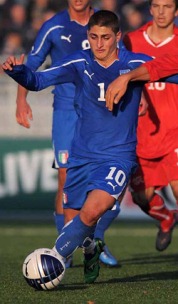 On 13 May 2012, Verratti was included into Cesare Prandelli’s preliminary 32-man list for the UEFA Euro 2012, being one of only two Serie B players to be part of it.

Verratti was subsequently cut from the squad on 28 May 2012.

Marco Verratti natural position is in the central midfield and often plays as a play-maker. He has the ability to make killer passes to his teammates.

He also can play as a defensive midfielder and is known for his tough tackling and physical play.

Even though lacking in height, Verrati compensates this with his speed and physical play.

He is often compared to Andrea Pirlo for similar style of play.

Stars Of The Future
Previous Article

Pescara Confirm The Sale Of Marco Verratti To PSG