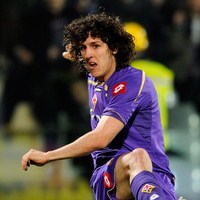 The 21 year old Montenegro striker has missed this campaign due to knee surgery, though returned to training last week.

It is said that Fiorentina may make some substantial changes to their squad over the summer, but they won’t let go of their most valuable player.

“I’ve read that Fiorentina will be built around me and that is pleasing,” he said.

“I have a contract until 2013 and I hope to do many great things at this club.”

Alberto Gilardino On The Verge Of Joining Genoa