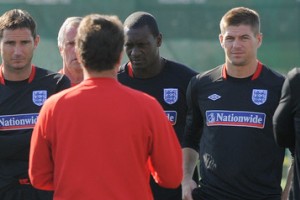 England captain Steven Gerrard has declared that he wants a return to the form demonstrated during the qualifying campaign when Fabio Capello’s side won nine of their 10 matches.

The 30-year-old midfielder said: “It is a do-or-die situation. We need to perform, we need to improve on the last performance.

“The training was very sharp this morning and hopefully everyone can do the business.

“In the last performance, we didn’t do what we did in the qualifying games.

“In those, we were confident, played aggressive football, pressed really well and were also very compact and difficult to beat.

“There were things missing from the Algerian performance and tomorrow we want to get those back.

“We want to start the game really well, play compact and be difficult to beat, but also have the cutting edge in the final third to score goals.”