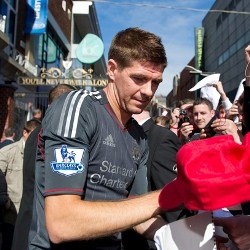 Steven Gerrard has said that he feels Liverpool have their mojo back under manager Kenny Dalglish.

The Liverpool captain, who has taken up yoga to build up his strength, has not played since the Reds’ memorable Barclays Premier League win over eventual champions Manchester United on March 6.

Without him his team-mates finished the season strongly and almost snatched a Europa League spot until losing their final two games to Tottenham and Aston Villa.

Gerrard said : “I’ve not kicked a ball for a long time, probably the longest I have gone in my career, and I can’t wait to get back now,”.

“I am excited about playing under Kenny Dalglish, just like the team did at the end of the season, which was going forward.

“We were playing with bottle and character and going all out to beat teams. And that always suits my style of playing.”