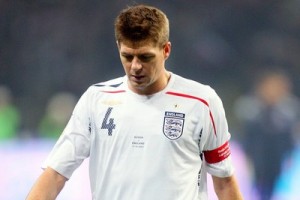 Bad news for the England national team as midfielder Steven Gerrard is set to miss England’s World Cup qualifier against Belarus on Wednesday because of a groin injury.

The Liverpool captain picked up the injury during Saturday’s 1-0 defeat in Ukraine and limped out of Tuesday morning’s training session.

England boss Fabio Capello told Tuesday’s press conference that Steven Gerrard did not complete training because the pain was the same as yesterday and that he will be going back to Liverpool.

Goalkeeper David James is also a doubt for Wednesday’s Group Six clash at Wembley after missing Tuesday’s training session and Capello said that the keeper has problems with his knee.

Capello also had some good news as he declared that the other players are fit. He added that even though there are some little problems but it is nothing to be worried about