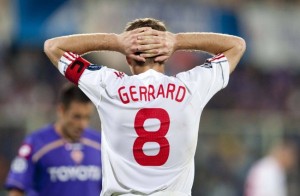 Liverpool captain Steven Gerrard and young team-mate Lucas have led the call for a vastly improved Liverpool display when they face Chelsea on Sunday in a key Barclays Premier League clash.

The Stamford Bridge showdown will be Liverpool’s first match since their dreadful Champions League display on Tuesday, when they lost 2-0 away to Fiorentina.

Gerrard said that the Liverpool players need to get the defeat in Florence out of their system quickly, because they will have a massive game now at Chelsea on Sunday.

The England international midfielder also added that Liverpool needs to produce a reaction at Stamford Bridge after their Champions League defeat to Fiorentina and that has to be the aim now.

Lucas agreed with his captain, and added that the players must learn from these mistakes and bounce back at Chelsea, and that Liverpool must win there before the international break in order to boost their confidence.

He also added that Chelsea are in good form at the moment but believes that Liverpool can win there it if the players go there with the right attitude.

He said that Liverpool has got the quality to get a win there. He went on to say that a win against Chelsea will then improve Liverpool’s confidence in the next two games in the group against Lyon.