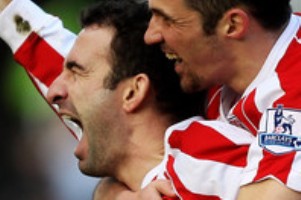 Stoke City continued their unbeaten start to the new year with a comprehensive victory over 10-man Blackburn at the Britannia Stadium.

Full-back Danny Higginbotham produced the finish of a striker in the eighth minute as he sent a volley past Paul Robinson before Mamady Sidibe made it 2-0 in first-half stoppage time.

Etherington then added a third in the second half shortly after Chris Samba had been sent off for pulling back Ricardo Fuller.

On the day the club commemorated Sir Stanley Matthews’ final competitive appearance in a Stoke shirt 45 years ago, Tony Pulis’ players produced a fitting performance for the occasion.