Reports are out claiming that former Manchester United legend Mark Hughes returns to to Old Trafford as a manager with Stoke City on Tuesday, but is unfazed with the prospect. 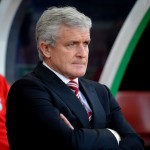 “Manchester United are a huge part of my footballing life.

“It was a long time ago that I left there and a lot of water has gone under the bridge.

“There are a lot of people there that I still know, and people that I enjoy seeing and catching up with.

“My only concern is going there with the players I have at my disposal and doing what we can to get the points on the board that we are hoping for.

“It’s a club that I have a lot of affection for of course, but my priority is to go there and win the game for this club.

“I have been there before as an opposition manager and won, so there is no reason why we can’t take the points tomorrow.”