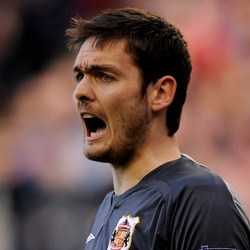 It has been revealed that Sunderland is ready to sell goalkeeper Craig Gordon.

The Journal has reported that the future of the Scotland international at the club is uncertain as talks of a new contract is yet to be opened.

An injury-hit couple of seasons have diminished his stock at the Stadium of Light and, with Arsenal reportedly interested in him, a summer exit is not out of the question for the £9million keeper.

The 28 year old is spending the summer recovering from his latest injury setback.