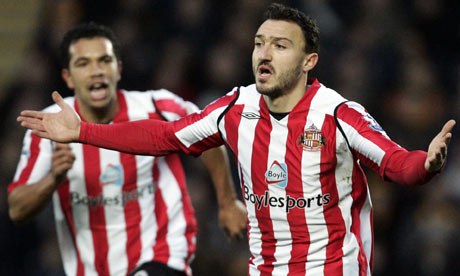 Premier League news are out and it has ben revealed that Sunderland boss Steve Bruce has a major doubt over the fitness of midfielder Steed Malbranque ahead of the Premier League clash with Chelsea.

The Frenchman twisted an ankle in Saturday’s 1-0 win at Bolton and is rated at 50-50 at best, while Kieran Richardson is struggling with a dead leg suffered in the same game.

Another midfielder, Andy Reid missed the trip to the Reebok Stadium with a thigh problem, but was expected to resume training on Monday, while keeper Craig Gordon was on the bench at the weekend as he continues his recovery from a knee injury.

Summer signing Paulo da Silva is working his way back to full match fitness, while Paul McShane remains on the sidelines after knee surgery.

Sir Alex Says It Will Be “Foolish” To Dismiss Manchester City


Roma Defender Cicinho Reveals He Is Happy At Europe