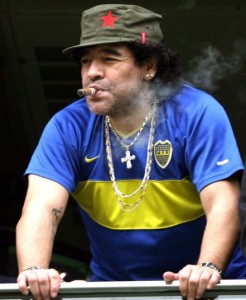 Sensational news are out and it has been reported that according to a recent survey, a majority of Argentines want Diego Maradona sacked as national team coach after their poor results in World Cup qualifiers.

It was reported that the survey carried out by Carlos Fara and Associates, who interviewed 442 people, said 67 percent believe 1986 World Cup-winning captain Maradona should not be in charge of the team, with just 22 percent in support.

Argentina have lost four of the six qualifiers they have played under Maradona this year, slipping to fifth place in the 10-nation South American race for four automatic berths at the 2010 finals in South Africa.

Argentina will now face Peru at home on October 10 and Uruguay away four days later in their last two matches looking to at least remain in fifth place, which would earn them a two-leg playoff against the team finishing fourth in the CONCACAF region.