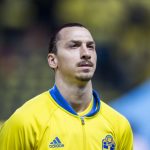 Reports are out claiming that Sweden coach Erik Hamren is willing to release Zlatan Ibrahimovic to negotiate with his next club.

The departing PSG striker is expected to join Manchester United.

Hamren says 62-goal record scorer Ibrahimovic may be allowed to leave their Euro 2016 camp to seal the deal.

Hamren said: “We have days off. We plan our activities and players can act based on that.

“But I’m not going to speculate about such things.”