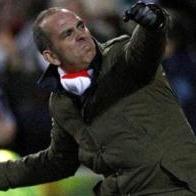 Paolo Di Canio enjoyed the finest result of his fledgling managerial career as his Swindon Town side produced the shock of the FA Cup third round when defeating Premier League Wigan Athletic 2-1 at home.

Wigan were without a victory in six games in the Premier League and suffered further disappointment when being defeated by Swindon – the side currently fourth in League Two.

Roberto Martinez saw Callum McManaman put his side in front after 34 minutes as he tapped home after Ben Watson’s penalty struck the post. However, Alan Connell quickly responded for the League Two side. Then, with 14 minutes remaining, Di Canio’s side snuck a win in fortunate fashion as Paul Benson deflected a shot past Ali Al-Habsi.