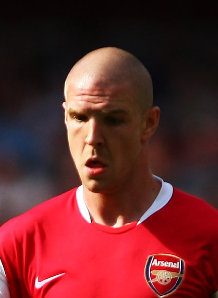 Arsenal defender Philippe Senderos has agreed a move to Premier League rivals Everton and that was confirmed by the Swiss Football Federation on Monday night.

It is believed that neither club has commented, however Swiss international centre-back Senderos has been linked with a move to Goodison Park for several days.

It was a wide known fact that the 24-year-old spent last season on loan with Italian giants AC Milan and returned with one year remaining on his Arsenal contract.

The report on the Swiss federation’s website claimed Senderos was joining Everton to improve his chances of playing regularly, with a view to pressing his claims for a place in Switzerland’s World Cup squad, should they qualify.