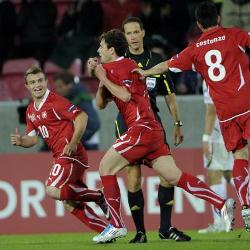 Switzerland’s group-stage 100% record had most expecting them to beat a Czech Republic team who had made the semis at a late stage against England. Their 1-0 win came as all seemed headed for penalties.

A dour first 45 minutes was followed by a similar second period but the Swiss almost won when Xherdan Shaqir struck a post in injury time.

Extra time followed a pattern of Swiss attacking and Czech defending. But Admir Mehmedi finally supplied the inspiration lacking all evening with a 25-yard opportunistic strike to set up the final most have been expecting since the competition began.