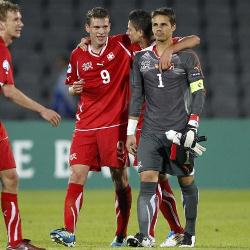 Switzerland cruised into the semi-finals of the European Under-21 Championship with a 3-0 win against ten-man Belarus, but Denmark’s defeat to Iceland meant both sides in Aarhus qualified from Group A.

The Swiss continued their impressive form at the finals in Denmark thanks to two goals from Admir Mehmedi in the first half. His first came from the penalty spot after six minutes and his second on 43 minutes resulted from a defensive aberration.

Substitute Frank Feltscher added a third from a tight angle in injury time, and by that point Belarus had already lost Sergei Matveychik to a red card for two cynical challenges on the elusive Xherdan Shaqiri.

However, they qualified at the expense of the hosts as Denmark succumbed to a 3-1 defeat to Iceland. All three sides finished on three points, but Belarus had the superior head-to-head record.