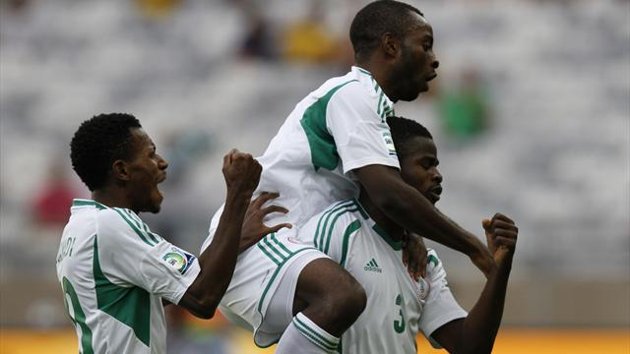 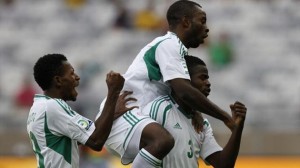 Tahiti suffered a 6-1 thrashing by Nigeria in the Confederations Cup although the amateurs did find the net as Jonathan Tehau scored at both ends when they made their debut in a major tournament.
Tehau, a delivery driver back home, became the first player to score for both teams in a Confederations Cup match having headed in for the Oceania champions after 54 minutes before finding his own net 15 minutes later in the Group B match.
Error-prone amateurs Tahiti, with only one professional player in their squad, suffered a terrible start when the ball hit the referee and ran to Nigeria’s Uwa Echiejile who scored in the fifth minute with a twice deflected shot.
Nigeria seemed set for a big scoreline when Nnamdi Oduamadi strolled through Tahiti’s defence to make it 2-0 five minutes later after the South Pacific islanders gave the ball away and he added a third for the African champions before the half-hour.
Tahiti brought the crowd to life, though, when Tehau headed a goal back before a previously wasteful Nigeria produced a late flurry when the unfortunate Tehau put through his own goal, Nnamdi completed a hat-trick and Echiejile scored his second.
“To lose 6-1 is hard but you have to put it in context,” Tahiti coach Eddy Etaeta said. “We are an amateur side playing against professionals and of course that showed.
“But when the draw was made in December I said if we scored one goal here it would be a great achievement and we have accomplished that.”
Nigeria coach Stephen Keshi added: “They (Tahiti) said they were going to fight like lions and they did.
“But, with all respect to Tahiti, you think it’s going to be easy playing against a team like that but they showed us they can play football and I congratulate them.
“We wasted a lot of chances in the first half but I am pleased we got the goals in the end.”

Arsenal poised to sign Higuain and Asier Illarramendi this week