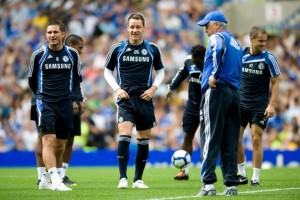 Chelsea captain John Terry has revealed that having manager Carlo Ancelotti as coach will help the Stamford Bridge club finally win the Champions League this season.

Terry has seen his side lose the Champions League final to Manchester United on penalties and also go close to lifting European football’s biggest prize on other occasions. Now the England captain believes Ancelotti will bring the same drive which saw him lead AC Milan to Champions League success to the Barclays Premier League club.

John Terry said that Chelsea have got players at the right age, with the right experience and the right quality to maybe push on this year or next year and win the Champions League.

Terry added that he has been with the club since he was 14 and the Champions League is something he desperately wants to win.

Terry also added that he thinks Italian managers are well organised tactically as the team do a lot on defending and working together.

Terry also said that looking at AC Milan over the years will reveal that they have always been very well organised and that the players know their job and do it correctly.

Terry believes Ancelotti has brought that mentality with him to Chelsea and said that it is something that manager has brought in and certainly got us doing,that is making sure that the players fight and work hard for each other.

Terry went on to say that if Chelsea is organised the team will be very difficult to break down and with Chelsea’s attacking quality, there is always going to be goals.

Terry ended by saying that in a short space of time, Ancelotti is passing on his knowledge and his experience and getting the players to do their tactical work during the week.


Survey Reveals That Diego Maradona Should Be Sacked