Terry Pledges His Future With Chelsea 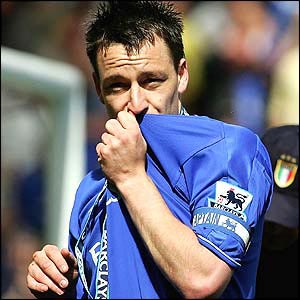 Chelsea captain John Terry has declared that he is “totally committed” to the Stamford Bridge side after persistently linked with a big money move to Manchester City. The 28 year old defender released a statement in which he insists that he has never contemplated leaving Chelsea.

John Terry also added that there has been a lot of speculation recently about his future. He also wanted to clear it up once and for all and said that he is totally committed to Chelsea and always have been.

He also added that Chelsea have also made it clear to him consistently that there was never any intention to accept any kind of offer from any club for a possible transfer.

Terry admitted to having a high regard for City boss Mark Hughes but decided to make public his determination to stay with Chelsea after “numerous discussions” with owner Roman Abramovich convinced him that the Russian’s ambitions matched his own.

Terry also went on to say that when linked with any club or with a manager who he has huge respect for, it will always make headlines but leaving Chelsea was never a possibility for him.

Terry also said that he knows that there has been comment that I should have made a statement earlier however, he said that throughout this period there have been numerous discussions with the owner and the Chelsea board and all agreed that the timing of any statement would suit everyone involved in those talks, not any outside influences or agendas.

Terry added that what is clear to him following those discussions is that Chelsea’s ambition remains as high as ever and this has been further proved by the appointment of Carlo Ancelotti whom he believes will take this club on to the next level.

Terry also said that another important factor was knowing that Chelsea would be securing key current players for the long term and the strengthening of the squad around this core is crucial to pushing the club on to greater success.

Terry ended by saying that he as committed as ever to helping drive Chelsea forward and he will be proud to lead the team for as long as he can.