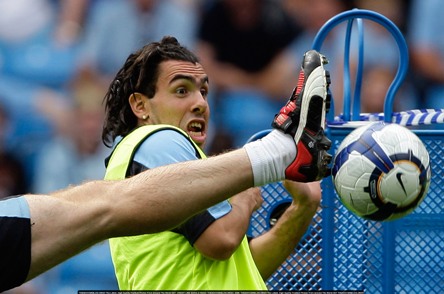 Carlos Tevez has claimed that Manchester United manager Sir Alex Ferguson is ”scared” of playing against Manchester City this season following their busy summer of spending.

The Argentinian international striker spent two years on loan at Old Trafford before securing a permanent switch to Eastlands over the summer and has not kept quiet over his dissatisfaction of being kept on the bench by the Scot.

Sir Alex, for his part, has played down the significance of the Argentine’s departure, whilst also warning Man City that it will be difficult to break into the top four this season. However, Tevez feels his former boss is worried about the Manchester derby on 20th September.

Tevez has also explained the differences between playing under Ferguson and working with current manager Mark Hughes saying that the latter is only focused on his work and the team and that he doesn’t get involved in the negotiations.

Tevez also added that Mark Hughes has been a football player so there is a big difference in the way he treats each player.

Harry Redknapp Vows To Challenge The Big Four This Season