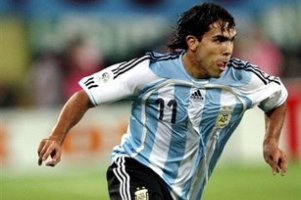 Manchester City striker Carlos Tevez has revealed that he is considering quitting the Argentina national team.

Argentina barely qualified to the 2010 World Cup by winning their final two qualifiers but still got plenty of stick over their poor campaign.

Manchester City striker Tevez, now age 25, said that nobody bothers him in England and said that there is no reason for him to come to Argentina and have a bad time.

He went on to say that the fans insult the players and the journalists criticise everything that the team does.

He ended by saying that he is tired of all that.