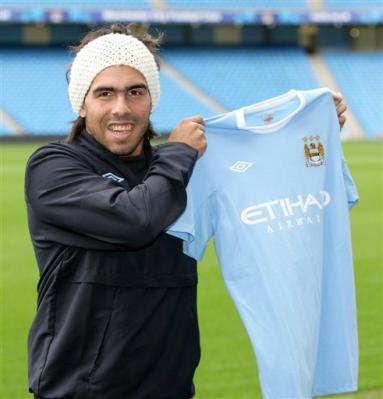 Manchester City has revealed that new signing Carlos Tevez is in danger of missing the start of the Premier League campaign after aggravating a heel injury in the shower.

It is said that the Argentine striker lost his balance when trying to get out of the shower and has missed all of his new pre-season programme to date.

It is also believed that Tevez will also miss Wednesday night’s game against Rangers and City boss Mark Hughes has appealed to Argentina coach Diego Maradona to leave Tevez out of the squad for next week’s friendly with Russia.

Hughes is keen to have Tevez available for City’s season opener at Blackburn on August 15, but with the former Manchester United man yet to train since his arrival at Eastlands, doubts remain over his match fitness.

Hughes told the club’s official website that the club thinks that Carlos should not play for his international team and that he should stay back next week.

Hughes also revealed that the Argentina doctor came over and he’ll be speaking to Maradona today. Hughes also added that that the doctor will probably want to check and see how Carlos is doing and said that ideally, he would prefer that Tevez wasn’t selected as he has not trained all pre-season.

Hughes also revealed that Tevez had an injury from his last international match and then banged the same area when he slipped in the shower.

However Hughes added that Tevez will be fine for the start of the season, but he is still not able to put his full weight on it at the moment.