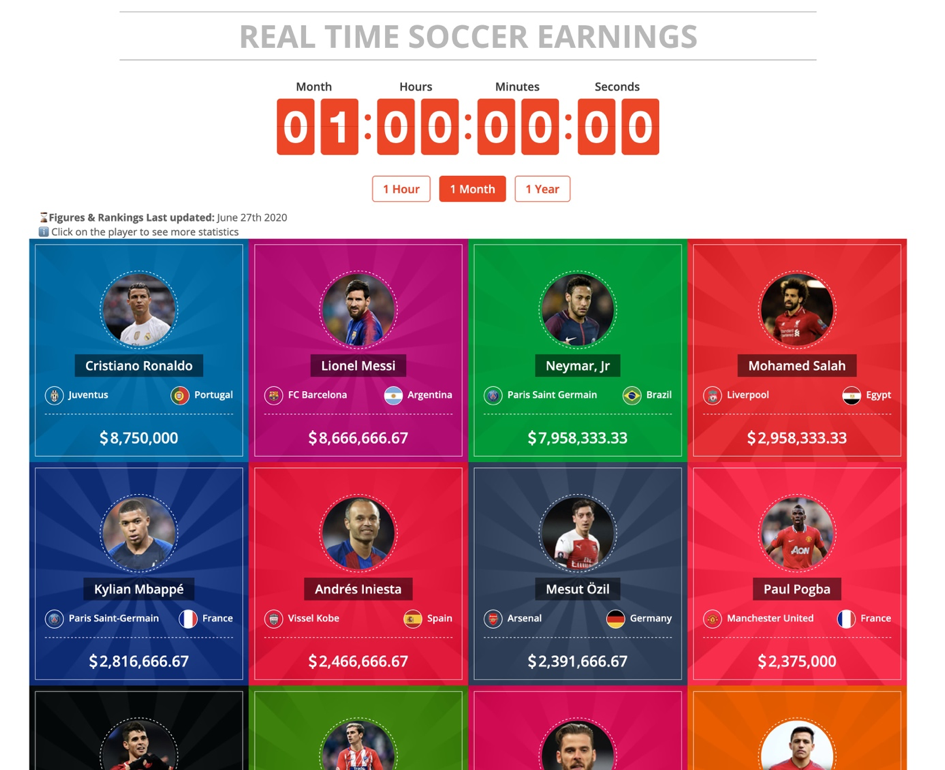 Ronaldo won over $100 million, spread over salary, bonuses and endorsements according to the infographic from betting website Findbettingsites.co.uk. Although he is thirty five years old and some are questioning his ability to keep performing consistently in a position where thirty five is unquestionably old, he continues to score goals and almost has a goal a game for Juventus this season.

Messi comes in second. A year younger than Ronaldo, he also continues to perform exceptionally well despite age creeping up on him. His statistics for Barcelona are frankly ridiculously good and he is on the verge of 700 career goals.

With the fans and the board clashing, especially with recent transfer dealings, Messi is the one shining light that unites the Catalan club in their admiration and love for the Argentinian, so it is no surprise he earnt $104 million, with $72 million coming straight from Barcelona.

Coming in third is another winger, the Brazilian Neymar. Consistently dazzling fans and opponents alike, his highlight reels are truly something to behold, with some tricks that are unthought of for the sheer audacity of them.

His move to PSG was criticised by many who thought that he should be trying to prove himself in the bigger leagues, but financially it was a move that made sense as his salary is worth $70 million annually.

The fourth highest earner has undoubtedly deserved his position over recent seasons. Mohammed Salah leaves everything out on the pitch whenever he plays for Liverpool and the city absolutely loves him for it.

Incredibly, he has been linked with a decrease of Islamophobia in Liverpool, with one of Anfield’s faithfuls chants being “If he scores another few then I’ll be a Muslim too”. His earnings are far below the top three, netting almost a third of what Neymar does at $35.5 million this past year, but that is more than enough for the modest Egyptian.

Kyllian Mbappe is fifth on the list and is the youngest in the top twenty by over five years. At this point in time, it seems inevitable that he will win a Ballon d’Or. He has impressed for Monaco, PSG and France’s national team, outshining everyone including Messi in the game of the tournament in the Russian World Cup. He earned over $30 million over the last year but if he continues on this path, his career earnings could easily eclipse both Ronaldo and Messi.

Whilst the first five names on this list are all brought up when discussing the world’s best, not many can make the case for the rest of the top ten. Although Andres Iniesta undoubtedly was one of the best, his age has caught up to him although that has not stopped him earning almost $30 million. His transfer to Vissel Kobe has been effective for the Japanese team and he has captained the team to victory many times, including in the Emperor’s Cup.

Next on the list is the controversial German Mesut Özil. No player divides critics and players alike as much as the nonchalant Arsenal midfielder and he most certainly has the quality and vision of a world class player, but he has been unable to find consistency at Arsenal.

Many misunderstand the influence that Özil has, made evident by the criticism of him at the 2014 World Cup despite him actually doing exactly what was needed of him. However, it is hard to justify the $23.2 million Arsenal pay him annual when considering his lack of appearances let alone performances.

Paul Pogba is another player who divides critics as to whether he deserves his paycheck of $23 million every year. He can transform matches in a heartbeat and has decent statistics for Manchester United but there are better midfielders than him in the Premier League that earn considerably less than him such as Kevin De Bruyne.

Next on the list is Oscar. Chelsea fans will remember him as a very good midfielder, but he decided to move to China and Shanghai SIPG. If he were at a European club, he almost certainly would not be on this list but earnt himself $27.5 million over the last year thanks to his $25.8 million yearly salary.

A third Frenchman rounds out the top ten earners in football in the form of Antoine Griezmann. He has not lived up to the expectations as of yet at Barcelona and will be disappointed with his current goal tally of eight this season. He earnt $26.7 million over the past year, thanks to his salary of $21.2 million and endorsements from Huawei and Puma to the value of $5.5 million.


Koeman to use Pedri and Francisco in Barcelona First Team