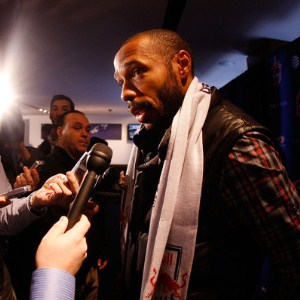 New York Red Bulls striker Thierry Henry has declared that he is fit for Saturday’s game with San Jose Earthquakes.

It has been widely known that the Arsenal legend has been struggling with an Achilles problem.

Henry told the New York Post : “Today I felt free, moving, asking for the ball behind (the defense),’’.

“Sometimes I have to go through the pain. It’s not easy playing but that’s the way it is. I have to go day by day and see how it goes. But I will be available on Saturday; hopefully we can do something good.’’

The problem has dogged Henry since 2004, back when he played for Arsenal.

“I’m less explosive but it doesn’t mean I couldn’t help the team any way. It is difficult for me mentally, I will be honest, but that’s the way it is.