Thierry Henry : It Is Normal For The Fans To Boo 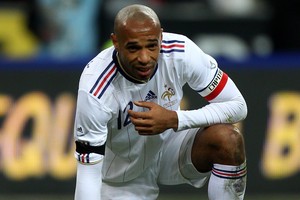 Thierry Henry has admitted that the boos and jeers he received from the Stade de France fans on Wednesday night was nothing new.

As Les Bleus went down to world number one Spain 2-0 in an international friendly, Henry, who was expecting no cheers after his handball incident against the Republic of Ireland in November, said French fans often booed when they were disappointed.

He added that he got booed just like Nicolas Anelka and Franck Ribery when they went off.

He added that the fans were hoping France would play a great match against Spain.

He then said that it is normal to boo when the fans are disappointed and that the players have to expect that.

France boss Raymond Domenech was not as forgiving though, saying that it was a pity and that the players need the support of the public.

He added that everyone wants the World Cup to go well and the team needs support and that he finds it difficult to understand the fans who boo.


Avram Grant Fined By The FA For Improper Conduct