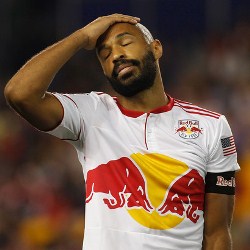 Thierry Henry of the New York Red Bulls has revealed that he thinks the international break in North America is one that provides difficulty at club level.

The CONCACAF Gold Cup will take plenty of players away from their clubs this summer and Henry, who played his entire career in Europe before coming to the States, admits it is not an ideal situation.

“We’re going to miss three more players after that, so we need to start to grab some points.

“We’re going to suffer when those guys are going to play for the Gold Cup, so we need to start to win tomorrow (against Colorado Rapids).

“I never dealt with that before, because if you have an international game in Europe they stop the league; it’s totally different.

“We’re the team that’s going to lose more players, so we’re going to suffer the most. But it doesn’t mean you’re going to have to lose games or lose points.

“Obviously it doesn’t help…it is what it is. We’re going to have to cope with it and make sure we can win without them.’’

Arsene Wenger Wants Thierry Henry To Stay Until May