With Arsenal having already signed Granit Xhaka from Borussia Monchengladbach, the club needs to ensure a centre back and a striker is brought in as Arsenal simply can’t afford to go into another season without having signed a striker and a centre back. The Gunners may even do without a centre back if the reports that Ricardo Rodriguez is on the way to the club is true. If they sign Rodriguez, and Soccer Sportsbetting sites are already shortening their odds on Rodriguez signing for the Gunners, it simply means Monreal can act as a third choice centre back and Gibbs the second choice left back.

However, failure not to sign a striker will mean another missed option. Especially as they are many strikers available in the market at the moment. Arsenal have constantly been linked with a move for Alvaro Morata but knowing Wenger, I am sure Morata is just the figment of the media’s imagination. I just can’t see Wenger spending 38 million on Morata when there are other cheaper and more prolific options available.

What are the options available aside Morata?


Mauro Icardi – The Argentine has recently hinted he could leave Inter Milan this summer should an offer from a club in the Champions league make an offer for him. And Chelsea and Manchester United both of who have been linked with his signing not playing in the Champions league next season, Arsenal can take advantage. Icardi has shown in the last three seasons that he is prolific. Despite ensuring a poor start last season, he still managed to score 16 goals and created 4 assists in 34 games in all competition. Higuain – When you are playing in a league as defensive as the serie and you end up scoring 36 goals in 35 matches, you are definitely a world class player. Higuain had a crazy season and his stats over the last three seasons, he has averaged at least 25 goals for every of the last three seasons, shows he is certainly not a fluke. Reportedly available for 45 million and with United and Chelsea not playing in the Champions League next season, Arsenal have a massive chance of getting the Argentine. If Wenger is ready to break Arsenal’s transfer record that’s. 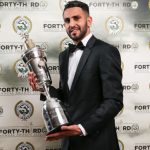 Mahrez and Janssen – Yes, those are two players. One is a winger/central midfielder and another striker. I believe Wenger could end up resorting to a solution like this if a world class striker is not available for the price he is comfortable with paying. Mahrez showed last season he could score goals and knowing Wenger, he likes wingers who can score. He could sign Mahrez and to replace Walcott on the wing and then bring in a less quality player like Vincent Janssen of Ajax who Arsenal have been linked with.