Tomas Rosicky Out Injured For Another 6 Weeks 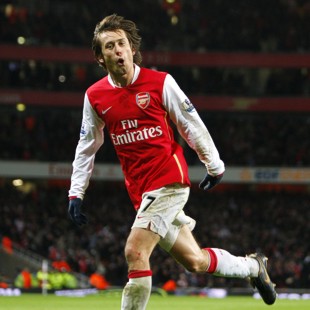 Bad news for all Arsenal fans as midfielder Tomas Rosicky could be facing another six weeks on the sideline as his painstaking return from injury continues.

It was reported on Thursday morning that the Czech Republic international has pulled a hamstring during training and will now miss the first month of the new Premier League campaign.

It was a wide known fact that Rosicky has been battling to return to action after 18 months out but after his latest setback, he’s been told by medical staff that he will not be able to play until mid-September.

Manager Arsene Wenger will now be without the midfielder for up to four Premier League matches, and the club’s Champions League qualifier.

The Gunners squad now looks a little thin all of a sudden after Samir Nasri broke a leg in training and Emmanuel Adebayor and Kolo Toure left for Manchester City.

Just last week Rosicky was bullish about Arsenal’s chances of retaining the title when he said that there plenty of options and that is why he feels that Arsenal will be stronger than last season because the boss will have more options.

It looks like Arsene Wenger will have to get busy before the transfer window closes.