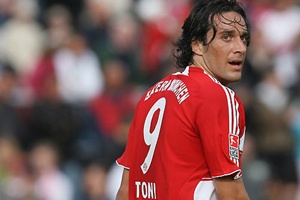 Bayern Munich striker Luca Toni has said that he would welcome a move to Napoli. The 32-year-old striker is out of favour at Bayern and is a reported target of AC Milan and Napoli in the January transfer window.

Toni told an Italian radio station that Napoli is an important club and that they have great fans. He also said that club president Aurelio De Laurentiis has big ideas so it is interesting to see what happens.

Toni arrived at the Allianz Arena in 2007 from Fiorentina and has scored 38 goals in 56 Bundesliga appearances for the German giants.

Despite recovering from an Achilles tendon injury last month, the Italy international continues to be overlooked by coach Louis Van Gaal, who also has the likes of Arjen Robben, Franck Ribery, Miroslav Klose, Ivica Olic and Mario Gomez in Munich’s squad.

Toni made clear this summer he would consider leaving Bayern if he failed to become a regular starter again as he needs to play to keep up his chances of representing Italy at the 2010 World Cup.

Toni admitted he would relish the chance to play alongside Fabio Quagliarella and Ezequiel Lavezzi at Napoli.

Toni added that Quagliarella and Lavezzi are two great strikers and together with them, he would feel great and that they would make up a very good attacking trio.


Rooney Hopes Ronaldo Doesn’t Make It To The World Cup