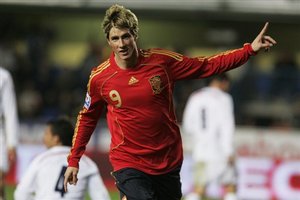 Liverpool striker Fernando Torres has been reported to have limped out of a training session with the Spanish national team on Wednesday night after suffering a groin injury.

The talismanic forward abandoned La Roja’s preparations ahead of their World Cup qualifying double header with Armenia and Bosnia-Herzegovina as precautionary measure and continued to work out in the gym.

However it is believed that the 25-year-old striker should be fit for Saturday’s match at the Republican Stadium although coach Vicente del Bosque, who is already without hamstrung Valencia forward David Villa, is unlikely to take any kind of risk with the 25-year-old as Spain have already qualified for World Cup 2010.

Liverpool manager Rafael Benitez will be keen to have his star striker returned safely to Anfield as Torres has been in top form so far this season, scoring eight goals in just seven Premier League games.

Spain also have concerns over Barcelona midfielder Xavi and Fenerbahce striker Dani Guiza who pulled out of the training session.