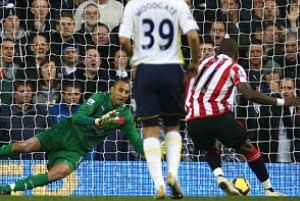 Sunderland striker Darren Bent missed a penalty on his return to White Hart Lane as Tottenham secured a 2-0 victory through goals from Robbie Keane and Tom Huddlestone.

Bent had the chance to level for the visitors against the side he left in controversial circumstances but Heurelho Gomes saved his weak spot-kick.

Huddlestone grabbed his third of the season with an effort that crashed in off the crossbar, doubling the lead after Keane’s early strike.