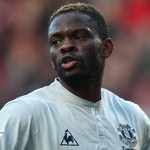 Reports are out claiming that Tottenham have signed Louis Saha from Everton.

The 33-year old French striker, who is out of contract in the summer, has reportedly penned an 18-month deal to join Spurs.

The move will allow the Toffees to make space for Rangers striker Nikica Jelavic who is set to join some time today.

Saha will now return to London where he spent time with Fulham before his 2004 move to Manchester United.