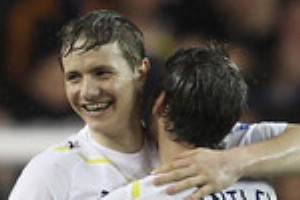 Goals from David Bentley, Roman Pavlyuchenko, and Eidur Gudjohnsen secured the win after Bobby Zamora’s opener for Fulham in the first half.

Zamora proved the difference in a close first-half, calmly slotting the ball past a helpless Gomes in the 18th minute for the game’s first goal after a lovely through-ball from Damien Duff.

Crouch was the main threat for a lacklustre Spurs in the opening 45 minutes, bringing a barrage of long-balls under control but failing to trouble Mark Schwarzer in the Fulham goal. Luca Modric was also guilty of wasting a number of chances, repeatedly creating dangerous opportunities only to send the ball wide.

However, the half-time introduction of Bentley and Tom Huddlestone completely changed the game for Tottenham, suddenly finding that final ball that had eluded them in the opening half.

Bentley’s impact was immediate, curling a free kick straight into the corner of the net to equalize in the 47th minute, before setting up Roman Pavlyuchenko to make the score 2-1 13 minutes later. Eidur Gudjohnsen then capped a fine move he’d started by rounding Mark Schwarzer and poking the ball into an empty net in the 66th minute, securing a trip to Wembley to face Harry Redknapp’s former club.