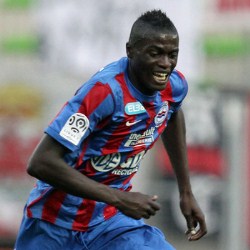 Reports are out claiming that Tottenham have made a late move for Caen striker M’Baye Niang.

The Sunday Mirror revealed that Spurs supremo Daniel Levy is about to pull a fast one on bitter rivals Arsenal – by snapping up Niang.

Levy has invited the pacy forward to Spurs and he is due in north London on Monday to begin talks about a bargain move from Caen, who are frustrated by the summer chase for the 17-year-old striker’s signature.

Niang was at Arsenal training for a week and manager Arsene Wenger wanted to buy him.

But, with only a small offer up front, the Gunners’ final bid was not accepted by the French club.