Reports have emerged claiming that despite playing League One football in 2015, Dele Alli is now believed to be worth more than Mesut Ozil. 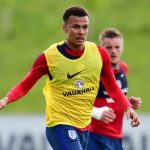 The CIES Football Observatory has released a list of the world’s most expensive footballers which shows Tottenham starlet Alli sitting in the Top 20 with a valuation of £58m, £20m more than Arsenal star Ozil.

20-year-old Alli joined Spurs from MK Dons last summer, after signing with the North Londoners in January 2015, and enjoyed a stellar debut campaign in England’s top flight which landed him the Premier League Young Player of the Year.

Ozil, 27, also enjoyed a brilliant campaign as the Gunners finished second on the league table, but that did not stop the supremely talented Alli from flying past him on the elite list, which of course ranks Lionel Messi at number one ahead of Barcelona teammate Neymar and Real Madrid ace Cristiano Ronaldo.

The estimated value of the players takes into account a number of factors ‘including age, length of current contract and potential suitors’.