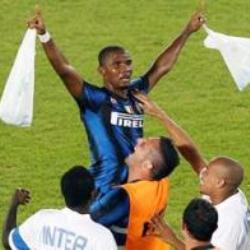 Inter Milan became the first Italian side to collect five major trophies in a single calendar year as they brushed aside TP Mazembe in the final of the Club World Cup.

Two goals in the space of five minutes early in the first half from Goran Pandev and Samuel Eto’o – who shook off an injury to play – put Inter in control, and Jonathan Biabiany completed the scoring five minutes from time.

The victory will go some way to easing the pressure on Inter boss Rafael Benitez, who has underwhelmed since taking on the unenviable task of succeeding Jose Mourinho.

Mazembe, who had stunned Brazilian club Internacional to earn their place in the final, never threatened another upset.