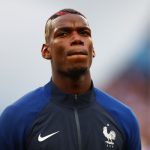 It has been revealed that Juventus legend David Trezeguet is urging Paul Pogba to stay in Turin.

This week, Pogba has been linked with Real Madrid and Manchester United.

Some reports have suggested that Juve could make in excess of €100m if they part ways with the talented Frenchman, but Trezeguet believes The Old Lady should hang on to the former Man Utd man if they can.

When asked about Pogba in AS, Trezeguet said: “I hope that he stays at Juventus, the club believes in him. Italian football also needs him, it’s important to count on players like these so that the championship becomes more attractive for other champions.”