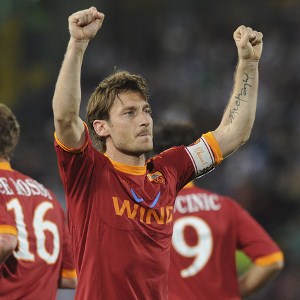 Francesco Totti scored with the last kick of the game as Roma boosed their hopes of a top-four finish in Serie A with a dramatic 2-1 win at Udinese.

The former Italy striker pounced four minutes into time added on when he flicked the ball home from John Arne Riise’s cross.

After a dour first period, Totti gave Roma the lead from the penalty spot on 57 minutes after Giampiero Pinzi had clumsily felled David Pizarro in the box.

Rossi cheekily chipped the ball down the middle as home goalkeeper Samir Handavoic dived to his left.

Udinese seemed to have rescued a point wehn Antonio Di Natale drove the ball past visiting goalkeeper Doni from Bernardo Corradi’s cushioned header on 87 minutes until Totti struck with the home defence switching off in the dying seconds.

Udinese remain in fourth place in the battle for a Champions League spot, but they are now only three points ahead of Roma.

Fifth-placed Lazio will move a point ahead of Udinese if they win at Catania on Sunday.