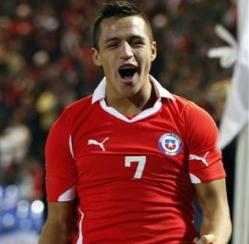 Alexis Sanchez ensured Chile’s Copa America challenge remains firmly on track by scoring the equaliser in a 1-1 draw with Uruguay in Mendoza.

The forward, who is in negotiations to join European champions Barcelona from Udinese, scored with an accomplished finish after 64 minutes to cancel out Alvaro Pereira’s opener, which came after 53 minutes.

The result leaves Chile top of Group C thanks to a 2-1 win over Mexico in their opening game, but Uruguay, who under Oscar Tabarez reached the semi-finals of the World Cup, have only two points from two games and are in danger of early elimination.