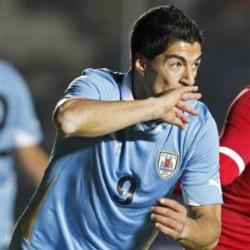 Yet another Copa America match ended in a draw as Peru held Uruguay 1-1 in an entertaining Group C opener in San Juan.

With World Cup semi-finalists Uruguay clear favourites at the Estadio del Bicentario, it was Peru who took a surprise lead through Paolo Guerrero, although Liverpool star Luis Suarez levelled on the stroke of half time.

Uruguay dominated possession but struggled to break down a well-drilled Peru side, who themselves had some good chances to snatch a shock win.

Uruguay will view the result as two points lost, particularly given a bad second-half miss by Diego Forlan, who has failed to score for his country since top scoring at the 2010 World Cup.