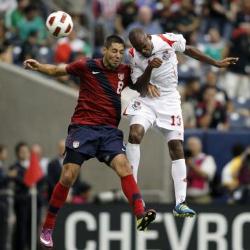 A 76th minute goal from Clint Dempsey put the United States into the final of the CONCACAF Gold Cup with a 1-0 victory over Panama on Wednesday.

The U.S will face the winners of the other semi-final between Mexico and Honduras, also being played at Reliant Stadium on Wednesday.

Panama, who had beaten Bob Bradley’s side 2-1 in the group stage, rarely threatened the U.S. but for all their possession the Americans created few chances.

The breakthrough came 14 minutes from the end when substitutes Freddy Adu and Landon Donovan combined superbly — a cross-field pass from Adu found Donovan on the right and he burst into the area and played in a low cross which Dempsey slotted home at the back post.

The U.S. are seeking their fifth Gold Cup title in what will be their eighth appearance in the final of the championship for North and Central America and the Caribbean.