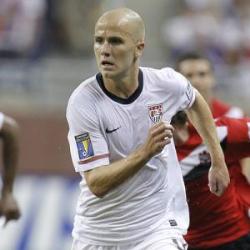 Jozy Altidore and Clint Dempsey were on target for the United States as they defeated Canada 2-0 in their Gold Cup Group C opener on Tuesday.

Striker Altidore opened the scoring in the 15th minute with a smart shot on the turn that crept under the body of Canadian keeper Lars Hirschfeld.

The United States were comfortably on top and extended their advantage in the 62nd minute when Altidore turned provider, bursting down the right flank and delivering a firm, low cross to the back post where Dempsey slid the ball in.

Canada then came alive with substitute striker Ali Gerba twice bringing great saves out of U.S. keeper Tim Howard, who had little to do in the opening 70 minutes.