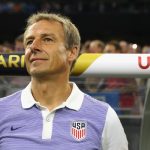 It has been revealed that Jurgen Klinsmann is the new favourite to take the manager’s role at Southampton.

According to The Sun, the German has been made hot favourite by some betting agencies to replace Ronald Koeman at St Mary’s.

Klinsmann has been USA national team boss for the past five years but could be set for a return to club management following a year spent as Bayern Munich boss which ended in 2009.

Betway reportedly has Klinsmann at 1/3, in from 40/1, to land the Saints job with former Manchester City manager Manuel Pellegrini next at 7/4.

Also high on the betting charts is Frenchman Claude Puel at 5/1 and ex-Ajax boss Frank De Boer at 12/1.

Mourinho : Leonardo Is The Right Man For Inter Milan!