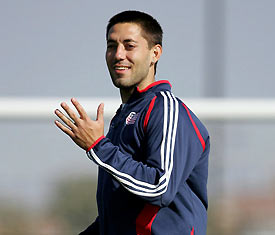 USA international striker Clint Dempsey has declared that he is ready to put pen to paper on a new contract with Premier League club Fulham.

Local newspapers have reported that Dempsey, now age 26, has given his Craven Cottage boss Roy Hodgson a major boost by indicating he will sign a new four-year deal.

Clint Dempsey was heavily linked with a move to Premier League rivals Everton earlier this summer.

Dempsey has so far played 81 games for Fulham and scored 14 times for the club.