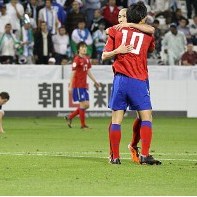 With the top three teams in Qatar all automatically qualifying for the next edition in Australia in four years time, there was plenty to play for in the third-place play-off and Korea raced into a three-goal lead after 38 minutes.

Alexander Geynrikh then struck either side of the break to give Uzbekistan hope of a fightback but they were unable to craft the equaliser they needed to force extra time as Korea equalled their performance from four years ago when they beat Japan on penalties.