The 29-year old former Brazilian international has joins Shaandong for a reported transfer fee of £10.3million but admitted it was a difficult decision to leave behind Champions League football. 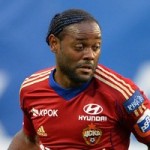 Love in a statement :”It was definitely not an easy decision for me,”.

“I had dreamed about playing with my teammates again in the Champions League and fighting for another league title.

“The club did everything to keep me, but I have to accept that my career will not last forever and I need to think about my family and the future.

“I am making a sacrifice to some extent, but I will never receive an offer like this again. I have agreed to move, but my heart and soul will be with CSKA forever.”

Love joined CSKA from Flamengo in 2012 and scored a total of 94 goals in 199 appearances for the Russian giants.