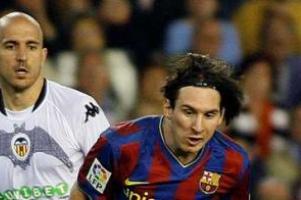 Barcelona – who would have made it a club-record start to the season had they won their seventh match in a row – could count themselves fortunate not to lose at the Mestalla.

The treble-winners were spared defeat by some great goalkeeping by Victor Valdes and wasteful finishing by their hosts, although had injured Valencia striker David Villa started it may have been a different story.