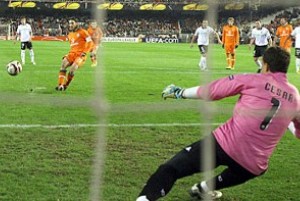 Valencia equalised two minutes after going down to 10 men to secure a 1-1 draw in the first leg of their Europa League last-16 tie at home to Werder Bremen.

Torsten Frings gave Bremen the lead after 24 minutes when he converted a controversial penalty.

Things got worse for the hosts when playmaker Ever Banega was shown a straight red card in the 55th minute, but Juan Mata quickly brought them level.

Bremen midfielder Tim Borowski nearly gifted the Spaniards the lead in the ninth minute by almost heading into his own goal.